January 04, 2007
Triumphing where many could not, Jens Hansen Contemporary Gold & Silversmith has handcrafted the famous Klein bottle mathematical theory into a silver baby rattle. Since 1968, Jens Hansen has impressed its and international customers with its leading edge Scandinavian designs. The bespoke jewellers are famed for creating the One Ring for Peter Jackson's Lord of the Rings film trilogy, and for handcrafting the Super 14 trophy and Air New Zealand Cup this year.
couple Lolo and Stephen Pike searched the world for someone to make a silver Klein bottle baby rattle for renowned physicist Brian Greene's newborn son, as Stephen Pike explains.

"Brian Greene did a very kind and noble thing by speaking and participating in our interdisciplinary conference in 1999 in " says Pike, "He was warm and wonderful and we gave all the speakers a glass Klein bottle as a gift.
"We kept in close contact after we met, while Brian's fame as a string theorist grew significantly each year," he says. "I am not a physicist and I am not sure that even if I were I could understand the complex mathematical models Brian is playing with.
"We have a great deal of respect for Brian, as much for his kindness as for his brilliance, and we wanted to do something nice for him. So, when we heard of his son's birth, we thought a silver Klein bottle baby rattle would be a perfect gift, and should be no problem to construct," he explains. "We were very naive and have learned much since."
Stephen Pike explains the long and convoluted journey to Jens Hansen Contemporary Gold & Silversmith in Nelson, who made the complicated baby's rattle.
"Our search for someone to make the rattle started with the gentleman who made glass Klein bottles in , but he said a silver version was beyond his skills and he could not recommend anyone who could do the work," says Pike.
"Our search then took us to and some Celtic style silver workers who thought it over but then sent us on to someone in who didn't have any idea how to proceed.
"An artist friend in Massachusetts referred us to two people, one who does complex three dimensional mathematical models and prints them on a three dimensional printer but he couldn't work it out in silver, and a silver worker who declined to take on the project," he continues.
"Then we tried some silver workers in Virginia and North Carolina who declined after thinking it through, as did a woman in Seattle and a woman in Colorado, all of whom concluded it was beyond their skills.
"Some months later, having almost given up, we were in Nelson at Jens Hansen Contemporary Gold & Silversmith, famous for the Lord of the Rings One Ring, and we spoke with Halfdan Hansen.
Hansen said that like the other silversmiths he wasn't optimistic that Jens Hansen could complete the project - at first.
"It was certainly one of the most unusual projects we'd been asked to do, but we thought it a fantastic opportunity," says Hansen. "I was touched by the story and believed the challenge of translating the Klein bottle into silver was important to solve for Lolo and Stephen, who had made incredible efforts to find someone to make this special gift."
To make the rattle, the Jens Hansen silversmiths started by using the latest technology to create a 3D computer model of the shape. Typically a wax model maker would be used to 'print' an object in 3D and then the ancient LostWax casting process would be used to make it in silver. However, because the Klein bottle is strictly speaking a 4D object that doubles back on itself, it could not be printed in one piece, so it had to be broken into three separate sections - the bottle body, the curved neck and the neck extension that doubles back inside the bottle body. Each individual piece was then wax printed, cast in silver and joined together. After polishing it was hand engraved with the child's name and date of birth.
"We thoroughly enjoyed the involved process of making the Klein bottle rattle for the Greene family, but we knew it wouldn't be complete unless it actually rattled," says Hansen. "To make the sound, we poured small silver granules in the bottle base, and inserted a tiny perforated plate across the opening, to stop the granules falling out," Hansen says. "It worked really well. So, not only does it look lovely, it makes a sweet rattle sound."
"Brian Greene received the Klein bottle rattle at the end of November, and thinks it is exquisite.
"I am thrilled with the heroic efforts undertaken to make our son this beautiful work," says Greene. "It was incredibly thoughtful of Lolo and Stephen to attempt to translate the Klein bottle into a cherished keepsake for our son.
"I thank my good friends for searching and finding Jens Hansen," he says. "The rattle is just beautiful, and incredibly similar to the Klein bottle. We look forward to traveling to in the not so distant future so we can thank everyone involved in person".
About Brian Greene:

Brian Greene (born February 9, 1963), is a physicist and one of the best-known string theorists.
Since 1996 he has been a professor at . Born in , Greene was a prodigy in mathematics. His skill in mathematics was such that by the time he was twelve years old, he was being privately tutored in mathematics by a professor because he had surpassed the high-school math level. His father, Alan, was a one-time vaudeville performer and high school dropout who later worked as a voice coach and composer.
In 1980, Brian Greene entered Harvard to major in physics, and with his bachelor's degree, Greene went to in , as a Rhodes Scholar.
He is a prolific writer, with his book The Elegant Universe: Superstrings, Hidden Dimensions, and the Quest for the Ultimate Theory (1999), a finalist for the Pulitzer Prize in nonfiction, and winner of The Aventis Prizes for Science Books in 2000.
Brian Greene also dabbles in acting; he helped John Lithgow with scientific dialogue for the television series 3rd Rock from the Sun, and he had a cameo role in the film Frequency.

About the Klein bottle: 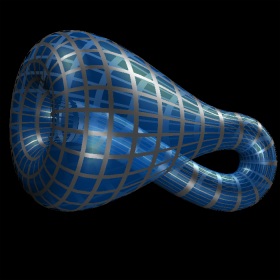 The Klein bottle was first described in 1882 by the German mathematician Felix Klein.
In mathematics, the Klein bottle is a certain non-orientable surface, i.e., a surface (a two-dimensional topological space) with no distinction between the "inside" and "outside" surfaces.
Picture a bottle with a hole in the bottom. Now extend the neck. Curve the neck back on itself, insert it through the side of the bottle without touching the surface (an act which is impossible in three-dimensional space), and extend the neck down inside the bottle until it joins the hole in the bottom. A true Klein bottle in four dimensions does not intersect itself where it crosses the side.