The Ring As A Symbol: What Does It Mean To You?

In the Lord of the Rings, the one true ring was a symbol of power and control. Though beautiful, it was also terrible – especially when placed in the wrong hands. Few could resist its temptation. Throughout history, rings have been used been used to symbolise everything from devotion, fidelity and eternity, to the representation of a deity. However, the most common use of rings today is the denotation of love in engagements and weddings. For Lord of the Rings fans, the One Ring may represent the commitment to a long and often arduous journey, during which true friendships (or fellowships) are formed. Even though it is unlikely you and your spouse will be traversing mountain ranges, eating Elven bread and battling Orcs; The One Ring is a symbol of your commitment to the journey, and a reminder that you are walking together, working against forces that could pull your world apart.

Jens Hansen Gold and Silversmith are the original designers of The One Ring for the Peter Jackson film trilogy.

Rings designed by the Jens Hansen team are as close to the original One Ring as seen in The Lord of the Rings films as you are ever likely to achieve, whether you are looking for a wedding band, a special gift, or simply indulging in something for yourself. 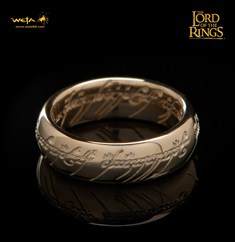 Nearly 5000 years ago, the ancient Egyptians wove papyrus, rushes and reeds into narrow bands to be worn around the finger to symbolise eternity. In ancient Egypt however, the hole in the ring was also a symbol for the wearer of a gateway. A pre-cursor to the modern wedding ring, ancient Egyptian men gave a woman a ring only to signal immortal love that would last for eternity – the afterlife being something the Egyptians were very invested in.

During Roman times, rings were created from more expensive materials which were much more durable, such as bone or leather. In later years, the material was most commonly iron. Roman men didn’t go in for as much romance as their Egyptian forebears, instead claiming their women with an iron circle known as an Anulus Pronubus.

As in Lord of the Rings, this circle of metal was a symbol of power and control over another person. Obviously, the one true ring boasted the power to control more than just one man, but Tolkein may have taken inspiration from this ancient custom:

“One Ring to rule them all, One Ring to find them,
One Ring to bring them all and in the darkness bind them.”

The Romans were also the first culture to have their rings engraved, like the secret message written on The One Ring.

The Claddagh is well recognised as a traditional Irish ring, featuring two hands holding a crowned heart. It has been produced since the 17th century, with its original design associated with Claddagh – an Irish fishing village.

This ring is given as a symbol of love and friendship – but it is also commonly used as a wedding ring in Ireland. It may also be passed down from family member to family member through the generations. On the ring, the hands denote friendship, the heart symbolises love, while the crown is a sign of loyalty.

Like The One Ring in The Lord of the Rings, the Claddagh is part of a family of rings. The “fede” (meaning faith) family of rings date from Roman times and all feature the clasped hands symbolising friendship and perhaps a vow.

Jewellery insurance is imperative for items of worth – especially rings which are worn on the hands and could be subject to damage or loss relatively easily. If you regularly remove your rings, make sure you have jewellery insurance which covers you for theft as well. For example, chefs, dentists or health care practitioners may be required to remove rings for sanitation reasons, and store them securely. If for some reason, your ring has been swiped you will need to ensure you are covered for its value. You never know when somebody will be secretly coveting your “precious”.

In some instances it is possible to add your expensive rings and jewellery to your home insurance policy – although you may wish to invest in more specialised cover if you also require cleaning, re-plating or resizing. This is common for rings which are made to be worn for a lifetime.