December 20, 2012
An interview with Halfdan Hansen 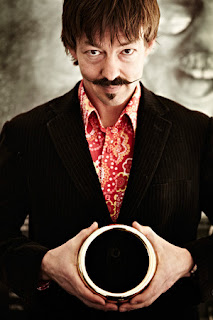 How did Jens Hansen become the maker of The One Ring for The Lord of the Rings and The Hobbit films?

My father Jens Hansen was widely considered to be one of the founding fathers of craft (artisan) jewellery here in New Zealand, and was especially well known as a ringmaker.  For that reason he was approached directly in 1999 by the Art Department of 3 foot 6, the LOTR production company, and asked to design a ring suitable to convey the power and gravitas of The One Ring.  The design eventually chosen was a minimalist solid 18 carat gold ring, which is much thicker through the band than a traditional ring - this elegant simplicity and significant weight is what gives the Ring its strong presence in the films.  Jens passed away in late 1999 and did not get to see his Ring on the big screen, however his creation of the 'Most Famous Ring in the World' has become my father’s enduring legacy.
What has your involvement been in the recent and upcoming Hobbit films?
We are delighted to confirm that we designed and made the gold Lord of the Rings rings used as props for The One Ring, and the ring called Vilya, worn by Elrond in The Hobbit: An Unexpected Journey. 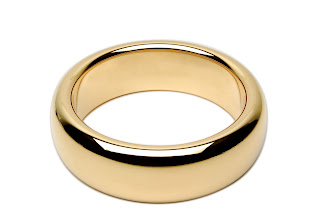 I'd like to hear more about The One Rings you offer... are they exact replicas of the prop used in the films? Could you describe what makes them unique?
The ring we supplied for filming both The Lord of The Rings and The Hobbit was 18 carat solid gold, completely smooth without any markings (like elvish runes or trademarks).  Our replicas of The One Ring are available in a variety of metals (solid 18ct Gold, 10ct Gold, Sterling Silver, and gold-plated Tungsten Carbide) to suit what our fans can afford.
As a mark of authenticity and to meet licensing requirements, each The One Ring bears the brands of Jens Hansen, Weta and Newline Productions discreetly on the inside of the band.
You can buy The One Ring for The Lord of The Rings, which is laser inscribed with elvish runes, or The One Ring for The Hobbit, which – true to the completely smooth ring in the film – has no runes.
Other licensed manufacturers' rings do not have to replicate the massive weight and exact lines of the originals, so what makes the licensed 'prop' replicas we have created unique is that they are crafted to the exact shape, thickness and proportions of the original movie prop; and they are created by us, the original and only The One Ring makers for the movies.
What about the Jens Hansen Movie Rings? How are these different from The One Ring?
The Jens Hansen Movie Ring is a faithful replica of our original Ring design for Peter Jackson as it appeared on screen.
Unlike The One Rings we make with Weta, it is not an officially licensed product.
However, it is an elite, elegant replica of the original prop, created in the workshop where the One Ring was designed by Jens Hansen.
The Movie Ring comes in 18ct gold, Palladium, Platinum, White Gold, Sterling Silver, and unique Black Satin Chrome. 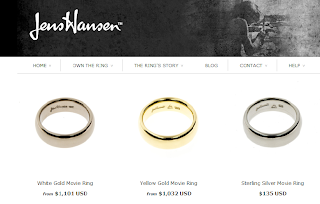 To be as faithful to the Ring described in Tolkien’s books as possible, the movie makers asked us not to use any engraving on the ring but rather, as you are probably aware, added the Elvish writing in post-production.
To maintain this accuracy the Jens Hansen movie replica ring has no inscriptions or engraving other than the Jens Hansen jeweller’s hallmark and signature, which appear on the inside band of the ring. These are the guarantee that your Jens Hansen Movie Ring came from the original source and are not normally seen, of course, when the ring is worn on a finger.
Many of our fans have told us they prefer the plain finish of our ring precisely because it is exactly how we made it for the movie and because of what they feel is its understated elegance. They know they have the 'real thing'. This is the choice of the aficionado!
What is Weta's involvement with The One Ring? Are they also selling it?
The actual prop rings created for the movies were contracted independently between Jens Hansen and Peter Jackson's film production company.
All of the official The One Ring replicas Weta offers are supplied by Jens Hansen. 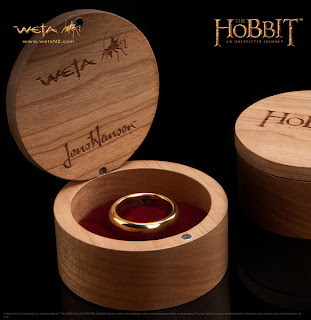 Weta has secured rights, under license from Warner Bros, to offer official movie merchandise. When it came to offering their official The One Ring, they chose us, as the original designers and creators of the Ring for Peter Jackson, to create what is therefore the most authentic and accurate 'official' The One Ring available.
It is important to note that it is Weta not Jens Hansen that has the license from Warner Bros.  Jens Hansen create and supervise the production of these licensed merchandise replicas and supply them to Weta who then sell them through their own Weta Cave store and website, and also resell around the world through various retail channels, including ourselves.  Weta are responsible for the choice of the beautiful wooden presentation boxes that each ring comes in.  Also, in the case of the LOTR ring replicas which feature the now famous "One Ring to Rule Them All' magical inscriptions it was Weta artists, who had worked on the LOTR movies, who assisted us to accurately reproduce in metal what was actually a CGI special effect when it appeared on screen in certain key scenes.
We’re delighted to be working with Weta. They not only had the idea to get and put in the very hard work to meet the necessary licensing requirements, but also the reputation amongst collectors and fans to take The One Ring worldwide - and the integrity to want to offer the most accurate replica they could, using as many as possible of the original New Zealand artisans involved in the creation of the movies.  They have been very generous and gracious partners. 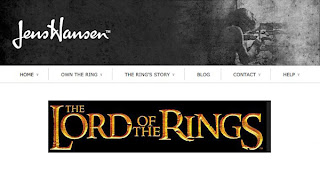 Have you had a lot of interest in the Ring? How many have you sold?
Oh yes! Over the more than 10 years since the first LOTR movie was released we have maintained a steady flow of visitors to our website and our small (500 sq ft) studio workshop in Nelson, New Zealand.  Our fans are interested in the story of the creation of the Ring and love the fact that they can see us busy at our workbenches and can commission us to make unique wedding and engagement rings and other jewellery to order which ships worldwide.  The credibility and reputation conferred from with having worked for Sir Peter Jackson has been invaluable to us. In fact it has now been revealed that instead of getting tattoos like The Lord of the Rings cast, the actors who played the dwarves in the Hobbit– plus Martin Freeman (Bilbo) and Ian McKellan (Gandalf) – commissioned special rings made by the Jens Hansen team to symbolize their journey while making the film.
Have you seen more interest in the Ring lately with the release of the Hobbit?
Yes - Weta sold out their first consignment from us within 24 hours, and we are working very hard to keep up with current demand, with the worldwide general release of the first instalment of the Hobbit movie trilogy and, of course, Christmas.