Thorkild Hansen, son to Jens, and brother to Halfdan, is featured in New Zealand's North and South magazine.

Facing his own mortality has taught Nelson woodworker Thorkild Hansen the simple art of living.

“Technically, I’m deemed to be dying,” says a very candid and remarkably healthy-looking Thorkild Hansen. “Mesothelioma is not a cancer that people tend to survive.” 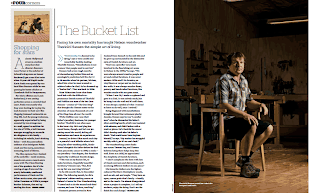 Hansen had seven rough months of chemotherapy behind him and an oncologist’s prediction he’d live for 12 to 18 months when his partner, Miriam, asked him what he most wanted to achieve before he died. So he dreamed up a “bucket list”. That was back in 2006...